BC’s physical and biological landscapes are exceptionally diverse and complex. Physical forces like plate tectonics have combined with climate to create an intricate network of mountains, plateaus, valleys, canyons and floodplains that
support an extremely wide range of ecosystems.

Natural landscapes are shaped in part by the physical elements of the non-living surface of the earth. At a very large scale, massive rigid plates that are constantly on the move cover the earth’s surface. BC is part ofis part of the North American plate, which is interacting with the Juan de Fuca plate, the Explorer, Plate and the Pacific Plates. 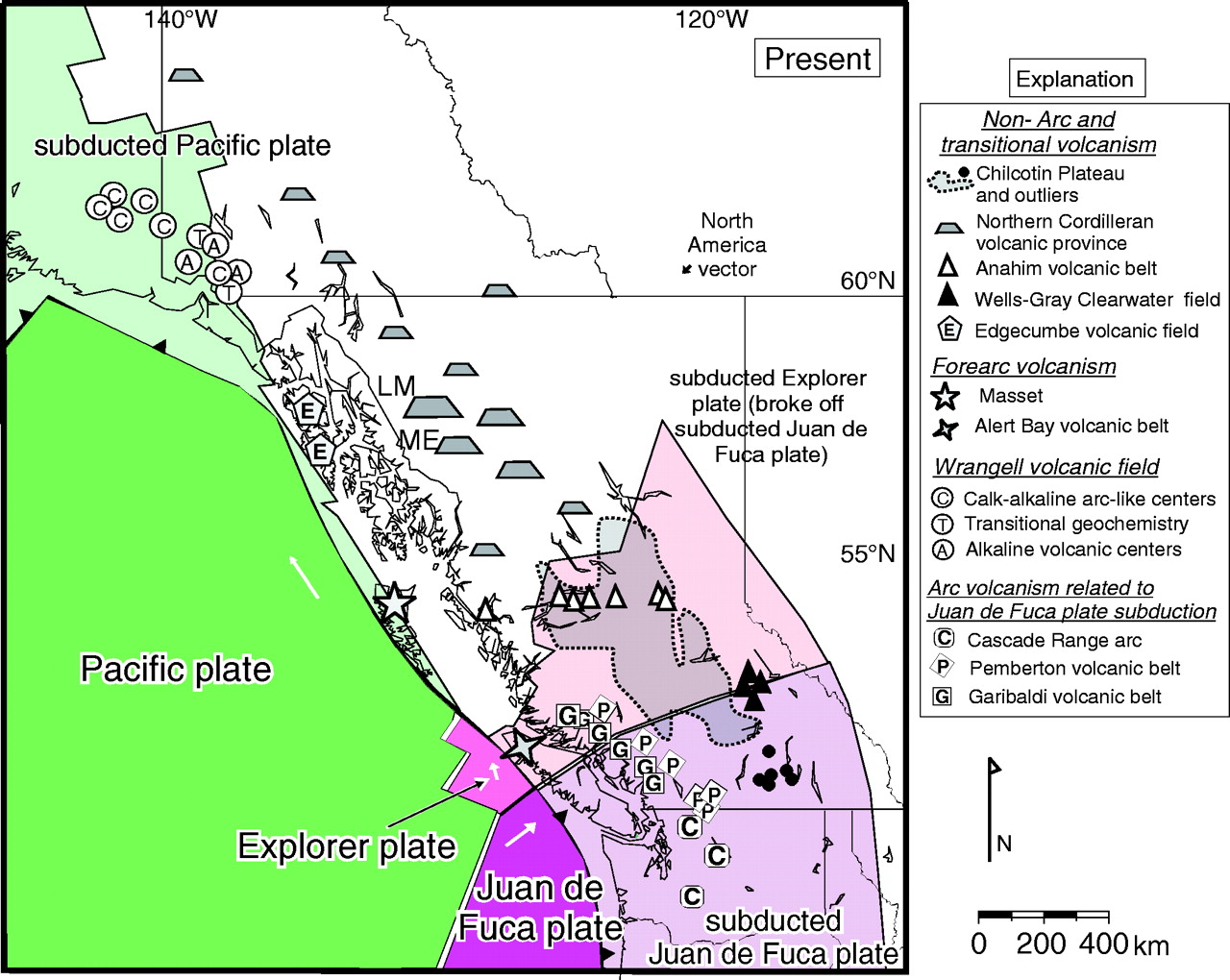 BC’s physical landscape has been, and continues to be shaped by its position on the East side of the Pacific Ocean. Over geologic time, complex plate tectonic processes have moved and “glued on” fragments of the earth’s crust, called Terrane’s, to the West coast of the Pacific Northwest creating five distinct geologic belts.

The major geologic belts are is unique in their geologic history and they accounts for BC’s many mountains, plateaus, and complex rock structure.  While on the West coast, they also are a contributing factor to BC’s active frequent earthquake zones.

The North-Eastern corner of BC is a part of Canada’s Interior Plains, a relatively flat plateau composed of sedimentary rocks that were once, long-ago, part of a great inland sea.

Next is the Foreland Belt; it is characterized by includes the jagged sedimentary rocks of the Rocky Mountains, and the long, narrow Rocky Mountain Trench — the longest valley in North America.

Farther west the Omineca Belt contains the metamorphic and highly mineralized rocks of the Columbia Mountains including also the Purcell  and Monshees Mountain ranges.

The Intermontane belt occupies much of central BC, known as the interior plateau, with its gently rolling uplands  consisting of mostly lava rock from ancient volcanoes and lava flows.

Finally, on the west coast, the Coast  and Insular belts make up the steep, rugged West Coast mountain ranges made of hard granite rock and also contains some of BC’s recent volcanoes. 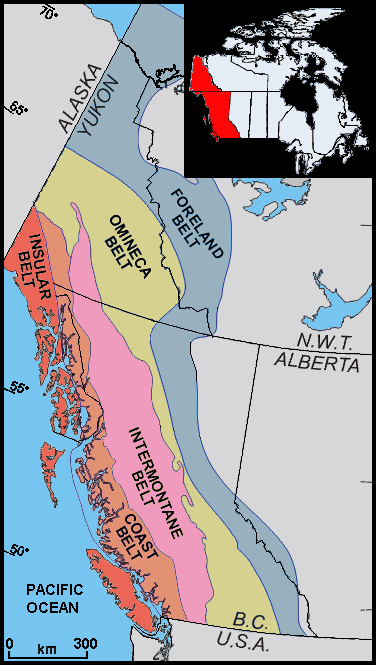 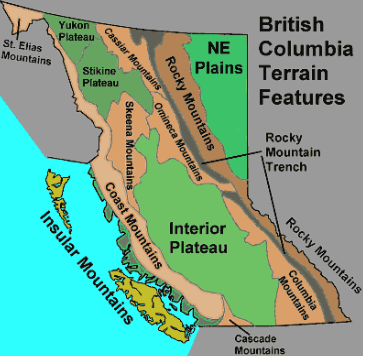 All of British Columbia was covered by a thick sheet of ice during the most recentlast ice age; . BC became generally ice free between 7,000–13,000 years ago.

This most recent ice age has had a major influence on BC’s Watersheds, the results being seen in form of:

The climate of BC is influenced greatly by the north-south orientation of mountain ranges and the position of the province relative to the Pacific Ocean.

For most of the year, moist eastward air is forced over the mountains.  As the air rises, it cools resulting in precipitation on the west facing slopes leaving drier conditions  on the east facing slopes. This phenomenon is known as
orographic lifting.

In the winter, the moister west facing and drier east facing slopes pattern is  magnified as warm moist air is carried  from the Pacific Ocean to the mountains where it meets cold air from the arctic. The is collision of air masses results in frequent heavy rain and snow storms. 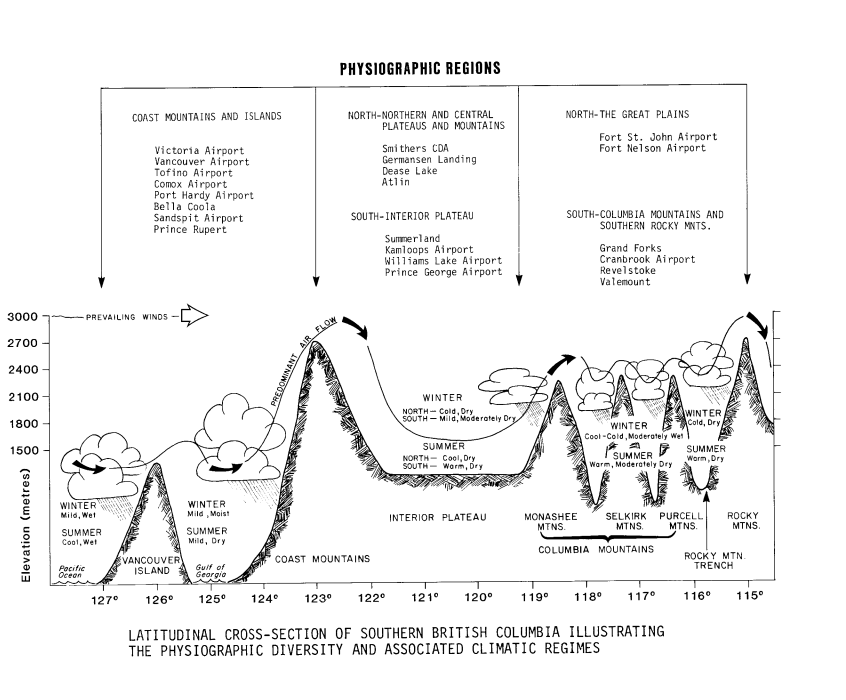 In the summer, the pattern often changes. A high-pressure system often persists off the west coast deflecting moist air to the north resulting in generally warm, dry summers over most of BC.

Because of the moderating effects of the Pacific Ocean, the west coast of BC enjoys the longest  frost-free season in Canada, averaging more than 200 frost free days per year. To the east of the Coast Mountains, the Pacific Ocean’s moderating effect is effect is much less; the Central Interior Plateau averages only 75 to 100 frost free days per year.

Significant climatic variation also exists between valleys and uplands, and between the northern and southern parts of the Province.

The combination of complex geology and climate create the conditions needed to support BC’s wide range of ecosystems. From the marine environments off the west coast, through steep coastal forests, across rolling grasslands and dry-belt forests, spanning vast northern boreal forests and wetlands, rising to high alpine tundra, and dropping to hot baking deserts, BC’s ecosystems are among the most diverse in the world.

The Ecoregion Classification system describes broad regional ecosystems based on the interaction of climate and physiographyography. Ecoregion classification examples include Ecodomains, Ecodivisions and Ecoregions.

In BC there are: 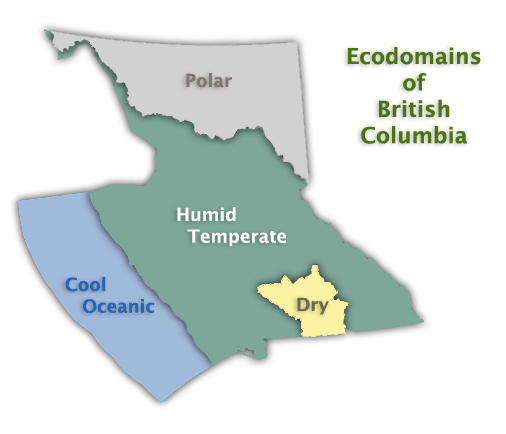 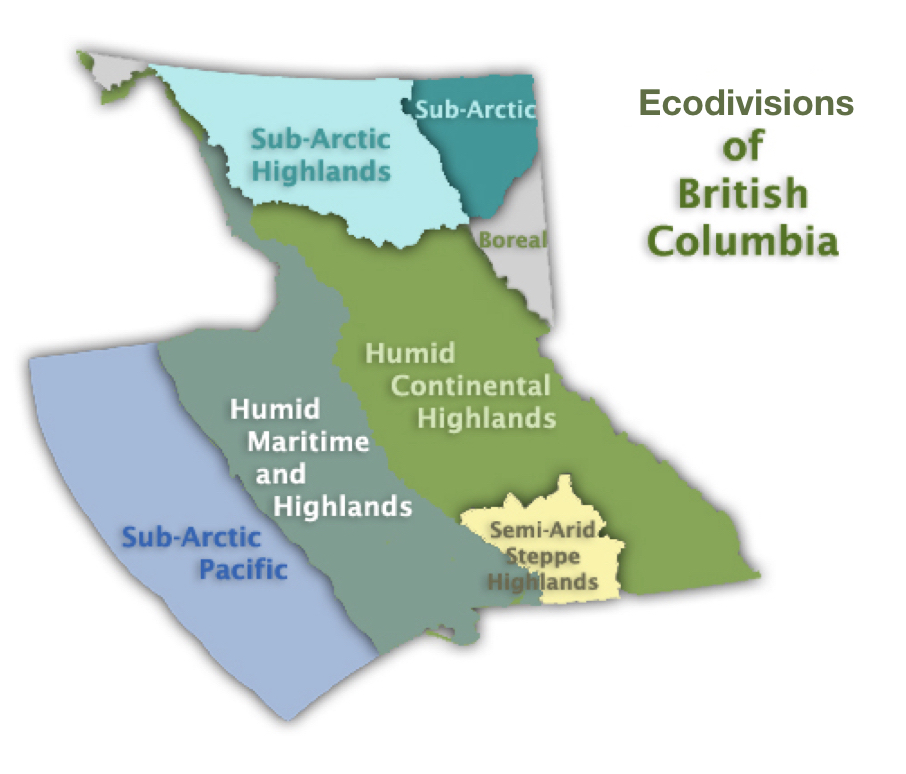 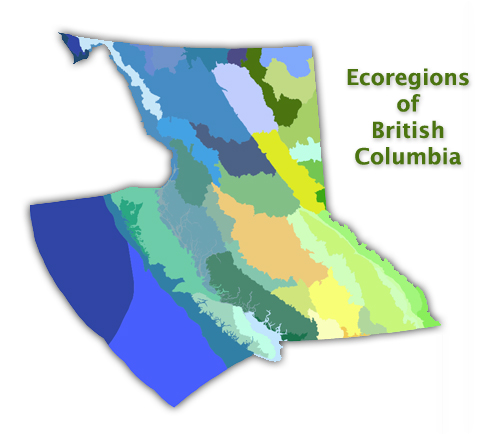 The Biogeoclimatic Ecosystem Classification is more detailed than the Ecoregion system as it classifies ecosystems by vegetation, soils, and climate. 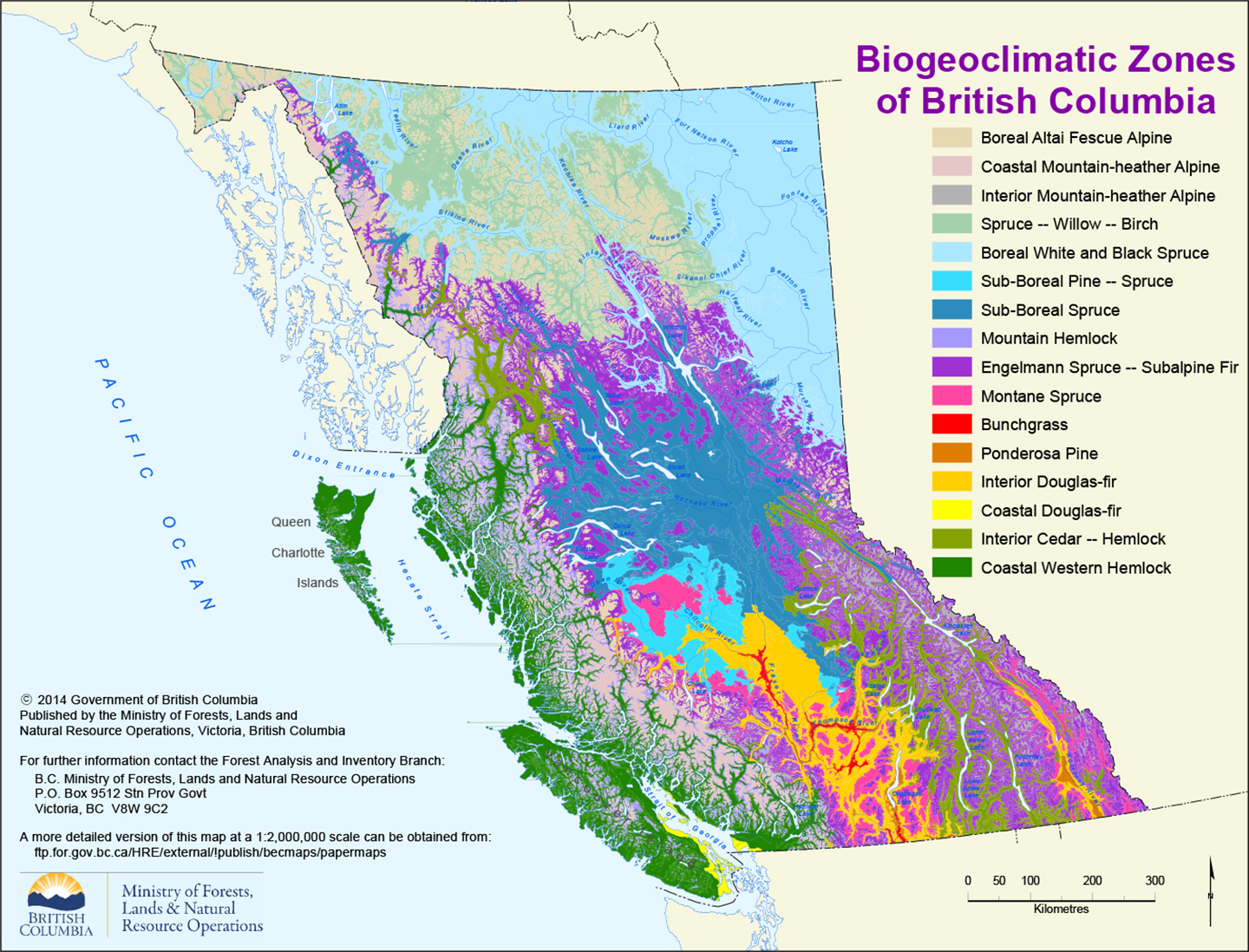 According the BC Government, 37% of BC's unique land base is conserved in some way: wildlife habitat areas, old growth management areas, parks, conservancies and protected areas.

What natural landscape of BC do you live in?

Use BC Tomorrow to see how past land-use has changed the area of natural landscapes in your region, and what effects land-use may have in the future.

Closed captioning available through video below.

A Summary of Climatic Regimes of British Columbia, BC Ministry of Environment, 1981