Back to home Page

A watershed is an area of land that collects the water falling onto it like rain and snow. Because water is drawn downhill by gravity, the highest points of a watershed like the ridges, mountain tops, or high hills define the watershed’s boundaries.

Water either flows over the surface of the land in streams or rivers, seeps into the ground to flow underground or recharge groundwater aquifers, or returns to the atmosphere by evapotranspiration. Some of the water is collected and remains in lakes or seeps into the ground to become groundwater aquifers. Most however,  travels the full network of streams and rivers and ultimately be drains into an ocean.

Watersheds can be as small as a single stream or as large as Basins containing many smaller watersheds. Watershed often cross municipal, regional, or even international borders and can be governed by organizations with competing values or interests. BC has 9 watershed Basins and they are the Mackenzie, the Fraser, the Columbia, the Pacific Ocean Seaboard (sometimes divided into the North Coast and South Coast), the Nass, the Skeena, the Stikine, Taku and the Yukon. Each Basin includes many smaller watersheds.

For example, the Fraser River Basin is composed of 12 watersheds including the Nechako, Quesnel and the North and South Thompson Rivers.

Mountainous regions in the province collect snow and ice in the winter and release it as meltwater in spring and summer. Most freshwater input into the oceans off BC’s coast comes from this melt water and is a critical element of healthy marine ecosystems.

Watersheds are important because they supply us with our drinking water, provide us with water for agriculture and manufacturing, offer opportunities for recreation and provide habitat to all the plants and animals within the Watershed.

When watersheds are healthy and functioning well, they provide food and fiber, clean water, and habitat for native plants and animals. They move sediment from the mountains to the beaches and bays, sorting it along the way to create diverse landscapes and habitats. They cycle nutrients and convert them into forms that living organisms can use. Their floodplains and wetlands purify, absorb and store water, and then moderate its release to reduce harmful flooding while also sustaining flows during dry periods. They even influence air quality by absorbing pollutants. Healthy intact watersheds provide many ecosystem services necessary for our economic well-being including reducing drinking water treatment costs and protecting property values.

Human land use activities influence the movement of water through watersheds in many ways. Some of our activities speed up the movement of water. Solid surfaces like parking lots, sidewalks and the roofs on our houses prevent water from seeping into the ground and increase surface flow when it rains or snow melts. Roads and ditches gather up this surface flow and concentrate it into small channels, which in turn increases the flow rate or speed of moving water. These two effects combine to increase the risk of erosion and sedimentation of streams and rivers as well as the movement of nutrients and pollution into the watershed. The increased surface flow also increases the risk of un-natural flooding because the ground is not able to absorb the fast moving water as easily.

Other human activities slow down the movement of water through watersheds like weirs or dams that create reservoirs for irrigation or hydro-electric power generation. 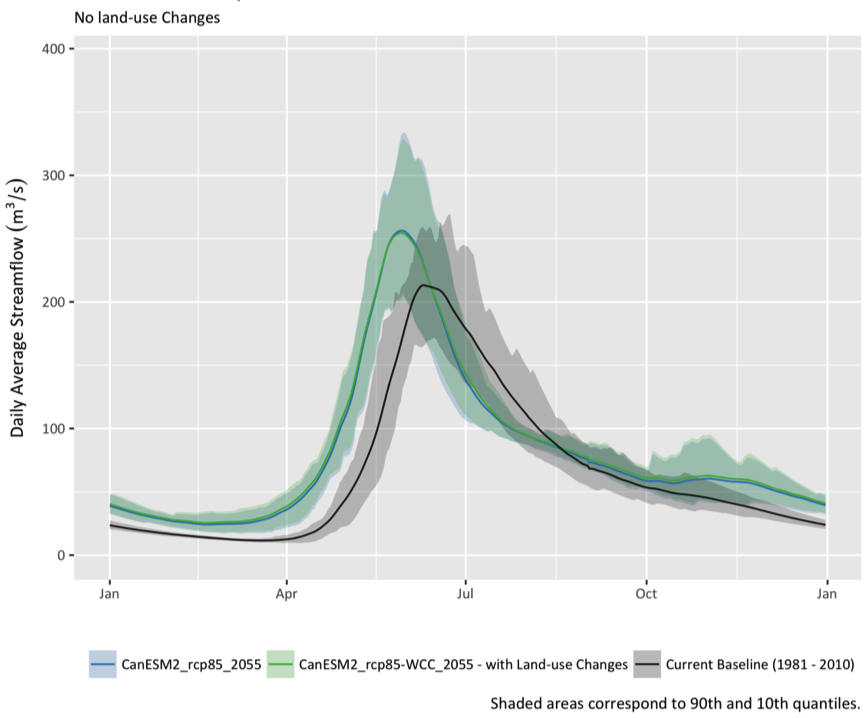 How do you think these changes could impact human safety and fish habitat?

Use BC Tomorrow to see how past land-use has impacted the Watersheds in your region in the past and what effects land-use may have in the future.

For Closed Captioning, See Video Below